Get Set for the Next WPT Montreal! 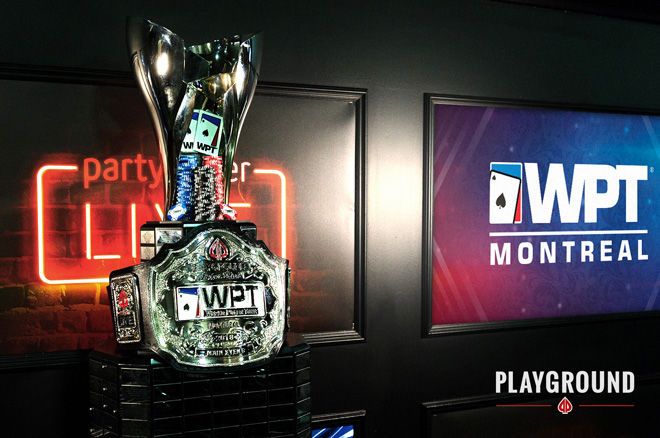 Following seven successful years at Playground, the WPT Montreal has become a fixture on the tour's schedule and the eighth edition is just around the corner! The WPT Montreal will take over the Playground complex from October 20 to November 4 with an exciting lineup of events that guarantees over $5,000,000 in prize pools.

The WPT Montreal features seven massive events, including the WPT500, WPTDeepStacks and a WPT Main Event that guarantees a prize pool of at least $3,000,000!

Players will be able to get a head start on the action online from October 20 to 24 thanks to a series of starting flights for both the WPT Main Event and the WPT500 on partypoker. Once the live action begins at Playground on October 25, players will also have a variety of single-day events to choose from, including a Ladies event, a Bounty and a Freeze, each with five-figure prize pool guarantees. The series also includes a three-day $5,000 + $300 High Roller with a $500,000 guarantee to provide something for players of all levels.

The $3,000 + $300 WPT Montreal Main Event guarantees a whopping prize pool of $3,000,000. The winner will walk away with not only a huge cash prize but also the highly coveted WPT Montreal championship belt!

Players can take part online through a combined flight that will roll two days of play into one on partypoker so qualifying players can arrive at Playground with their spot in the money already secured. Each starting flight, whether online or live, allows players a single re-entry. Anyone looking to play their way in to the Main Event at a discount will have plenty of opportunities, thanks to a series of eight $330 + $30 satellites from October 28 to 31 that will allow at least 130 players to qualify.

The $1,500 + $150 WPTDeepStacks Montreal features a $500,000 prize pool guarantee and will have an unlimited re-entry format for each of its three starting flights. The WPTDeepStacks provides some outstanding value and is sure to bring players out in droves.

Qualify for the Caribbean Poker Party

Arriving near the end of the event is an outstanding opportunity for players to qualify for the Caribbean Poker Party for only $200 + $20. The unlimited re-entry satellite on November 3 guarantees at least three packages to the Caribbean Poker Party, at a value of $6,000 USD each, giving players a chance at both the holiday of a lifetime in the Bahamas and an opportunity to get a part of the $15,000,000 in guaranteed prize pools provided by this event.

There is a lot to play for at the upcoming WPT Montreal! As usual, the top-notch staff at Playground will be pulling out all the stops to provide the huge fields of players a world-class experience while dolling out millions in prize money in the process. Click here to see the full WPT Montreal event schedule. See you at the tables!