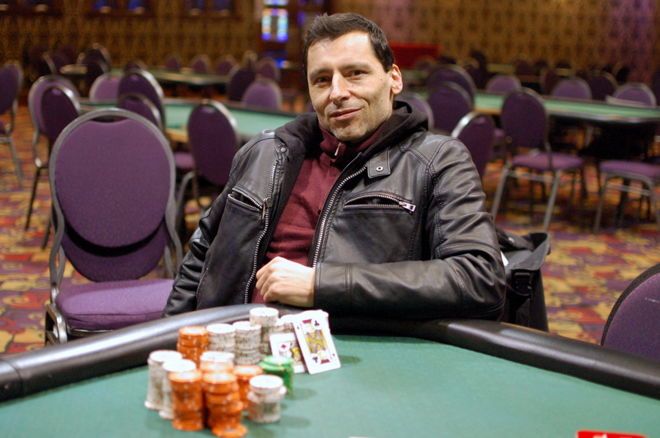 The $550 1 Day Mega Stack is now in the books, and the player with all the chips was triple WSOP-C ring winner Paul Sokoloff. He made it through the field of 66 entries to take down the $9,600 first place prize.

The 66 entries built a prize pool of more than $31,000, and a lot of familiar faces came out to try their hand at the prizes. As it typical in poker, most of them fell short of the seven paid spots. Among the notables who tried and failed were Haven Werner, John Abbot-Brown, Jerry Tria, Alex Tuhl, Julius Roque, and Dave Shores. One of the players who chopped yesterday's Seniors Event, Mike Lonigro, made it to the final table, but ended up out in ninth place.

It took a little over 9 hours for the bubble to burst, and the unfortunate bubble player was Francis Lagos. Lagos shoved his small stack with king-jack, but ran into the aces of Paul Sokoloff. He flopped two pairs on the ace-king-jack flop, but Sikoloff hit a set. Lagos still had backdoor outs, but he bricked them, and was the last player to exit with empty pockets.

They played seven handed for nearly an hour before Essam Saadeddine took seventh place. He got his money in good with queens against the suited king-queen of Alex Polkosky, but after flopping a single spade, Polkosky went runner-runner spades for the flush to bust Saadeddine in seventh for $1,500. Thomas Taylor quickly followed him out in sixth, but still added $1,900 to his more than $1 million (USD) in lifetime wins.

It was another 40 minutes before Henry Yang took the fifth place spot. Yang shoved with an ace, but Graeme Frank woke up with jacks and held to send Yang to the cage for $2,500. Shortly after Yang busted, PokerNews Canada reporter Tyler Warken took fourth place worth $3,400.

Alex Polkosky ended his deep run in third a few minutes later when he got his money in with a suited king, but was called off by Frank's ace. Frank held, and Polkosky was headed back to Edmonton with $5,000 extra in his pocket.

That set up the heads up battle between Frank and Sokoloff. Frank came into heads up with a big chip lead, but he ran into an opponent who was both playing well and running well. Sokoloff was short stacked for most of the heads up play, and in early action Frank chipped away at him with raises and shoves that Sokoloff couldn't call.

But Sokoloff was just biding his time. He finally found his spot 10 minutes into HU play when Graeme Frank shoved and Sokoloff called off with the better ace. Sokoloff held for a double, then just a couple hands later, he doubled into the lead when his worse ace got there against Frank's big slick.

The final hand was a cooler. Frank got it in with pocket fives against the pocket jacks of Sokoloff, but he flopped huge with ace-ace-five. But Texas hold'em is a seven card game, and when another ace came on the turn, Sokoloff vaulted into the lead with the better boat. The river wasn't the case five, and Frank was forced to accept $7,100 for second place.

The $9,600 win for Sokoloff marked his fifth career win. Three of those previous wins were WSOP Circuit rings, and the other one came in another Alberta tournament, the 2017 Deepstacks Poker Tour (DSPT) - Battle of Alberta, Calgary. This win adds to his better than $1 million (USD) in earnings, and also puts him in the running for the Player of the Series title at Fall Super Stack.

On deck for tomorrow is the $250 PLO at 2p.m., as well as a Main Event Satellite starting at 7p.m. but the marquee event begins on Friday with Day 1a of the $100,000 guaranteed $1,100 Main Event. There are two Day 1s for the Main, on Friday and Saturday, and its almost certain the guarantee will be crushed. In addition to the Main, there's a NLH Bounty event on Friday night at 7p.m. as well as the ever popular Team Event on Saturday night at 7p.m.