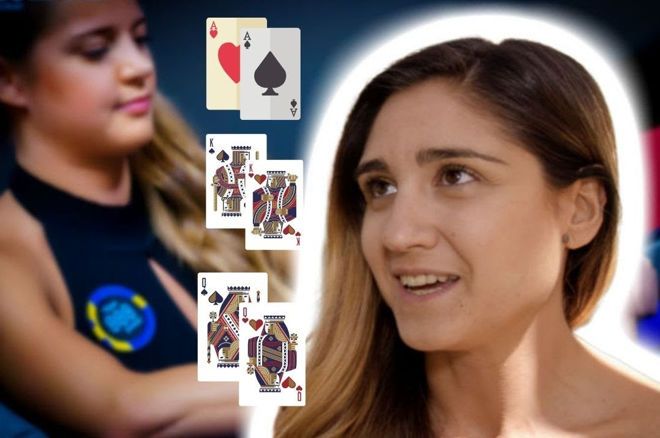 Big hands like aces, kings, and queens sometimes seem to "play themselves" in no-limit hold'em tournaments. But as Ana Marquez points out in the hand analysis shown below, that's not always the case.

The hand took place during a Day 1 flight of the recent 888poker LIVE Barcelona Festival Main Event and began with Lövgren opening from early position.

Jean-Paul Adolle then three-bet, getting calls from both Santiago Giraldez (button) and Marvin Hannemann (small blind). That's when Jean-Pasquale Zuccarelli reraise-shoved from the big blind for what at the time was a stack of about 23 big blinds.

Lövgren responded by moving all in for more, and Adolle with a starting stack less than Lövgren's but greater than Zuccarelli's put his full stack forward, too, forcing out the other two players.

When the trio showed their cards, it was clear why all three were eager to get their chips in the middle.

The board ran out ten-high, and all three players kept their seats with Zuccarelli more than tripling and Adolle and Lövgren both left with short stacks.

In her analysis, Marquez starts out by explaining how all three of the players who made it to showdown necessarily showed strength by their preflop actions (an early raise, a three-bet, then a shove over the top with four players in).

She does explain, however, how the hand represented one of those rare instances where a player (Adolle, in this case) might have actually folded pocket kings before the flop given the preceding action, although it that would have obviously been difficult to do.

Then (starting at about the two-minute mark), Marquez steps back to discuss strategies for playing a 25-big blind stack and how stacks of that depth often play differently online versus live.

Even with just 10 BB, players in live tournaments often have more play left than they realize, says Marquez as she recounts having been that short herself in the event.

"I still had a lot of moves," the 888poker Ambassador explains. "I could call a lot from the big blind, I could still open... you can still shove a lot and people are not going to call you correctly," Marquez adds.

Take a look and hear what else she has to say about strategy when playing those short-to-medium stacks in tournaments.