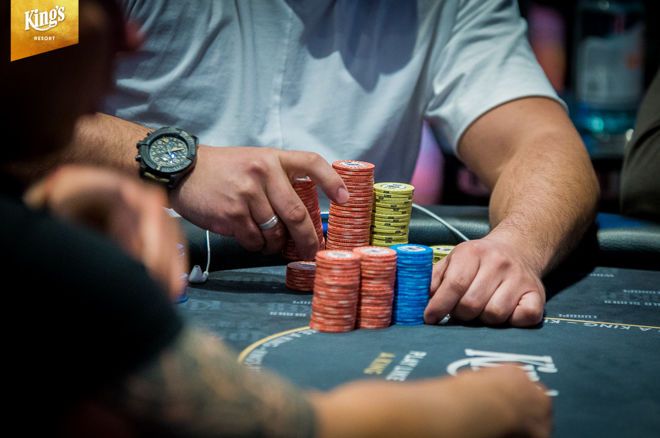 When we defend from the big blind in tournaments, we have an opportunity to represent a wider variety of hands than in almost any other situation.

This is especially true when the action is multi-way before the flop and the initial raise size is small. Our price to close the action improves with each call added to the pot. When we have low suited cards, for example, that are unlikely to be dominated, we can make some slam dunk calls and take control of certain boards.

Here's an example of what I'm describing, a hand I played from the middle stage of a $1,000 no-limit hold'em freezeout event.

Action began with an open from an early position player, followed by two calls, one in middle position and one on the button. The small blind folded and I looked down at

in the big blind.

There are few circumstances I would be looking to play this hand, but the odds on offer are very good. This is also a good example of a situation where being suited makes all the difference.

, meaning I flopped a fairly useless pair and a backdoor flush draw.

My plan is to check-raise this flop against nearly any bet-and-call action. Of course, I could check and fold if someone bets too big or if someone raises a bet. But for the time being, I am going to play my hand versus these opponents as if I had called with a four in my hand and flopped trips.

Unfortunately, it checked around. The player on the button seemed like an aggressive player, as did the initial raiser, so I was a bit surprised not to face a bet from either. On to the turn.

The turn was the

. That completed the flopped heart flush draw, though we had no indication that any player might have been chasing it.

I don't think I can lead at this pot on the turn. My hand is too weak, I have no redraw, and would have no real options after that if called. I wouldn't be able to value bet the river, and a bluff at that point might be hopeless. So I checked, hoping maybe to hit another five on the river some amount of the time. For the most part, I am giving up.

Suddenly I saw an opportunity. Maybe not as good as the one on the flop — or perhaps it was an even a better one. How good the opportunity was depended on how the button would perceive a check-raise at this stage.

The main ingredients are that the button has a weak range to bet here. It looks as if he is protecting a jack or semi-bluffing a lone high heart. Meanwhile I can represent two types of strong hands, trips and flushes.

The same goes for bluffs, actually. I want to get more folds with my bluffs, and I want their size to match what I might do with my value hands. So I raised to 16,300.

My opponent thought for a long time but eventually folded. Perhaps he had a jack and thought for so long because he was worried if he called now, he might not know what to do on the river when I bet again.

Speaking of, in this spot I have to be prepared to fire again on rivers that are not a jack and not a fourth heart. An offsuit ace might be a difficult river to bluff, because my opponent's main bet-calling hand on the turn is the bare ace-high flush draw. But apart from those cards, the story I am telling on the turn — that I have a value hand, trips or a flush — should be continued on the river where I should want to value bet a big size.

The key to this hand is that I can only win the pot when someone else bets. Once in a blue moon I might win when action checks down on some rivers. But I cannot bet out on the river, I cannot check-call the river nearly ever, and I cannot check-raise the river credibly.

In spots like this, it is important to stay disciplined, only putting in chips when the opportunity is there. If the button had checked the turn, I simply have to check-fold every river card that is not a five.