I’ve been live reporting for PokerNews since the 2010 World Series of Poker. To say I’ve seen some big hands over the years would be an understatement, but of all the tens of thousands of pots I’ve captured on paper, few reached the level of the one I watched go down at the European Poker Tour Prague Main Event yesterday.

Chip leader Ilkin Amirov then called from the cutoff, and when action reached Javier Gomez — who just won the World Poker Tour Prague Main Event a week prior — he moved all in over the top for 2.58 million in the big blind.

Amazingly, Amirov snap-called to put all three players at risk, and as fate would have it he held the best hand:

Understandably, the players, rail, and commentators on EPTLive were amazed at what they were seeing, a level of excitement that was ramped up when the

flop gave Gomez a flush draw. Everyone was drawing live to the turn, which ended up being the useless

That meant it all came down to the river. Here is how it looked on EPT Live, with the percentages showing each player’s remaining chance with one card to come: 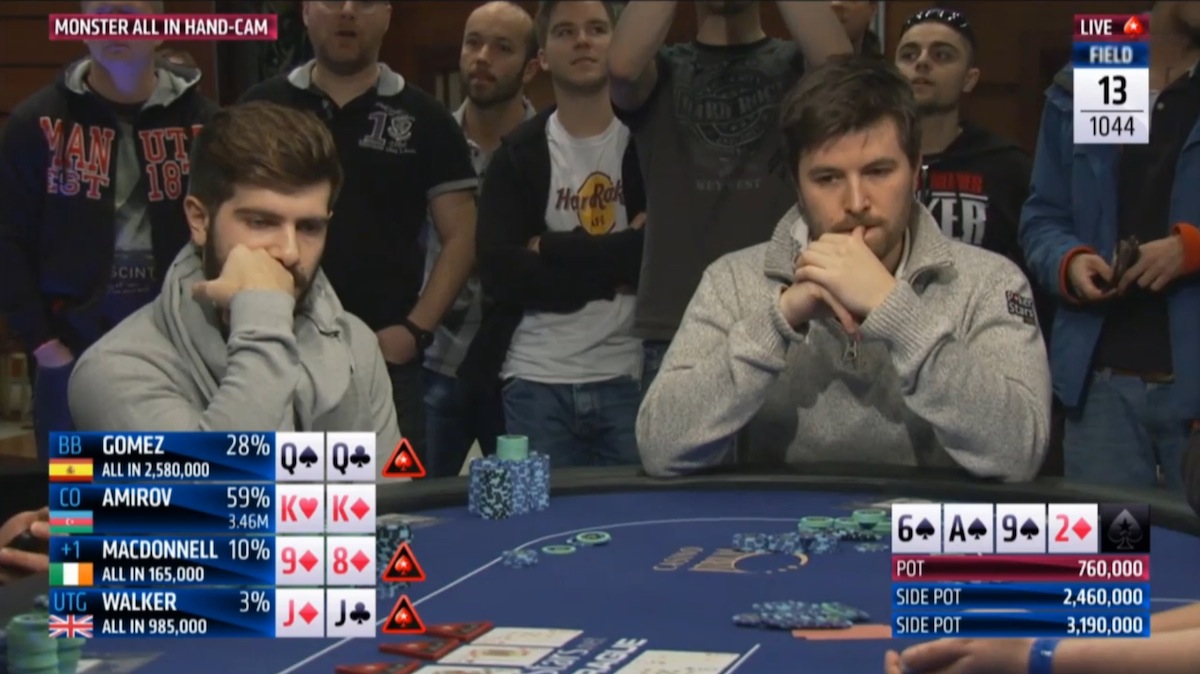 The dealer burned one last time and put out the

, which missed everyone and allowed Amirov’s kings to hold. Macdonnell and Walker were eliminated in 13th and 12th place, respectively, both for €50,990, while Gomez took 11th for €56,950.

Hands like this do happen, but rarely so deep in a prestigious tournament. What also made this hand special is the way it played out. Had action unfolded a bit differently, or the cards been distributed to different players, there’s a good chance all the chips wouldn’t have gone in.

For instance, imagine if Amirov had initially shoved all in rather than just called the raise? Gomez is a good enough player to lay down pocket queens in that spot. Instead, Amirov’s call looked relatively weak — perhaps a smaller pocket pair or ace-king — so Gomez’s queens no doubt looked appealing. Furthermore, what if Gomez had the jacks and Walker the queens? I’m guessing Gomez would have folded jacks with so much action in front of him.

Finally, it was entertaining to see every player still drawing live to the river. How often does that happen? To that end, how often does the chip leader hold the best hand and have it hold against three players to score a triple elimination — when there are tens of thousands of dollars on the line?!?

I can tell you the answer from experience — very rarely. That’s what made this hand truly special and one that will be immortalized in EPT lore. Remember that time in Prague when three players busted in a single hand when it was down to the final two tables? I most certainly do.

For more on this hand, check out this video I did with Sarah Herring: