Folding Aces: Is There Ever a Spot? 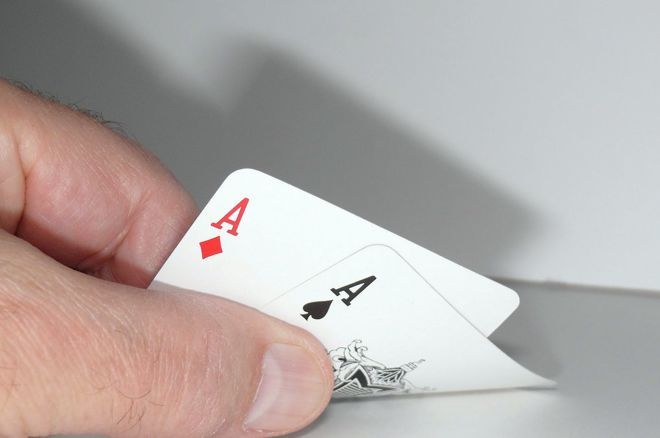 PokerNews Canada Editor Lyle "TenJilly" Bateman found himself in an interesting spot on a Unibet qualifier table recently, and it was interesting enough for Unibet Ambassador and author of Poker Satellite Strategy, Dara O'Kearney, to weigh in. The spot sees the hero in the small blind with aces facing an eight big blind shove from early position, and a reshove from a stack nearly identical to the hero's. It's always a reshove in a normal MTT, but 3 from the tickets in a satellite is a trickier spot. Dara breaks down the numbers in an excellent analysis below, and to check out a replay of the hand as it happened, watch the clip at the MotherShip Poker Twitch channel.

This is a super interesting spot because we are a significant favourite to win a seat whether we fold (by virtue of our stack) or call (by virtue of our hand). In satellites, there are often "lesser of two evils" spots but this is the opposite, a "better of two good options" if you will. It's complicated by the fact that there are so many possible outcomes whether we call or fold.

The big blind will usually call with any two, and the biggest stack will usually win the three way all in as he has by far the strongest range. However, any three of the players could potentially win the main pot, and either of the bigger stacks the side pot when the small stack wins the main, so the five other outcomes that are possible when we fold and the big blind calls are:

When we call there are even more possibilities. We can of course use a solver like HRC or ICMiser to get the exact answer, but that's not possible in game so we need some method to make a guesstimate from first principles. The two key things to do in tough spots like this are:

With regard to 1., when we fold, we can discard the more unlikely outcomes such as the smaller stack folding, or winning the three way all in. Not only are these unlikely, but they won't massively change our chances of a seat, so we can disregard them. In fact, all we really need to consider is the most likely outcome: the big blind calls, and the big stack knocks him and the other guy out. So if we fold, most of the time we will be on the bubble 4/6 with 17592, essentially equal with 5/6, and a bit ahead of 6/6 (with 14252). Using the gorilla maths method outlined in Poker Satellite Strategy (or our own intuition) we can work out that in this scenario the 40k stack will be about 95% for a seat, the two 30k stacks roughly 90%, our chances and those of the guy we are level with roughly 77.5% and the short stack 70% (if you run the actual ICM calculation this is very close: within about 1% in fact).

Similarly, when we call, the most important outcome in terms of assessing our downside is when we lose to the bigger stack (we are basically out, almost 0% for a seat when that happens). If we beat him but lose to tiny big blind stack, our chances actually go up, while if we beat him but lose to the 8842 stack we approximately break even both in terms of chips and chances of a seat. So we can simplify this part of the game tree to what happens when we call and lose to the big stack, which is we lose about 75% of a seat (dropping from the 77.5% we have if we just fold to some small number, let's say 2.5% for simplicity). If we call and win we win the seat, gaining 22.5% of a seat, so losing is over three times as bad as winning, so we need to be a better than 3/1 favourite against the big stack's range. His range should be jacks plus and ace king. Against this range, queens has only 47%, kings 63% and ace king 63%. Aces however has 83%, so it's a call.

I ran this in HRC, which confirmed aces (and only aces) is a call, making us roughly 8.5% of the value of a seat (about the margin of profit we have over 75% equity we figured out we roughly need, so our gorilla maths got us very close).

Folding in this spot turns out to be a theoretical mistake, but not a massive one (8.5% of a seat). By contrast, calling with queens (which I bet most people would in this spot) loses us almost 24% of a seat. Many would call ace king, which is even worse (it loses 28%), while even calling with kings turns out to be a bigger mistake (over 9%) than folding aces. The point I'm making here is that when in doubt, when you don't have time to make the rough gorilla math calculations in game and it feels close, err on the side of folding. An incorrect call is almost always a much bigger mistake than an incorrect fold.